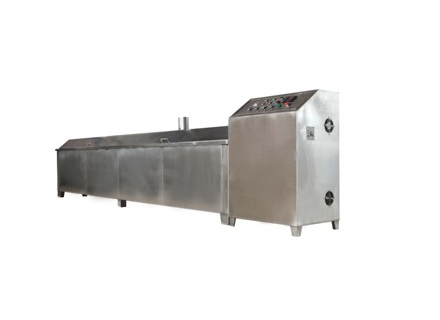 In international electrical standard (IEC61109 insulators for overhead lines – composite suspension and tension insulators for a.c. systems with a nominal voltage greater than 1000V – definitions,test methods and acceptance criteria) for overhead line insulator, polymer insulators shall be put into a sealed tank with salty water of certain percentage concentration. Water will be heated till it reaches boiling states, and this boiling procedure will last for 42hours or even more if needed. Power frequency withstand voltage test and electrical steep-front test are applied to specimen insulator after boiling.

As one of the most important tests of electrical overhead line insulators, this test is aimed to test the cohesion between the fiber glass rod and polymeric housing,as well as to test the tightness of interface between end fittings and insulator housing. Our testing machine can perform this necessary test for manufacturers, research institution or other insulator users whoever needs to test the quality of insulators. The machine is controlled by PLC and imitate the extreme severe condition for insulators under salty oceanic climate. All operations can be done through buttons on the panel, which make it controllable and easy to use.