Africa has been dreaming about establishing its own factory of high voltage polymeric insulators since long ago, and this year their dream come true.
The first manufacturer of 33kV silicon rubber insulator (polymeric insulator) is now moving its pace steadily to real production. This is not only a start but also a milestone for Tanzanian people. Being a helpful friend of Africa, China has made quick progress in high voltage transmission line industry in the past 3 decades, which enables hundreds of thousands of Chinese companies involved in electrical industry, producing electrical items like insulators, circuit breaker, surge arrestors, as well as production equipment and test equipment related to these electrical items. Thanks to the good relation between China and Africa, Tanzanian people now take advantage of this opportunity and quickly obtained necessary equipment and technology of making polymeric insulators from their eastern friends, saving much time and funds in researching and learning from mistakes on the way of electrical industry development.

In Dar Es Salaam, Tanzania, Contune International Corp, and its close partner Zibo Qianheng have supplied their production machines of insulators and testing facilities into this promising factory, offering foundation to move on with complete production line and also the quality control capability for their own.
Apart from the machines that are located in this new factory, local Tanzanian engineers have learned much knowledge of how to use machines like skilled workers in China, test methods and acceptance criteria in IEC standard, many of which have never heard of IEC before.

“They learn quickly”, said Weber Chu, the international market manager of production & test machine supplier, a key person who made this business through and gave training courses to local engineers. “They ask various questions, they are quite interested. Most of them are not familiar with insulators before, but they will learn how to produce insulators by themselves in the coming years.”
Mr.Abraham, CEO of this new factory in Dar Es Salaam and an experienced engineer and also a horned man, speaks of this project proudly: ”We will be the first one who produces composite insulator in Tanzania, and in east Africa too.”

As it is, this project is truly promising and beneficial in Africa, not only to the boss and TNESCO, far more than that, the start here will enable local people to supply the demand of polymeric insulators for OH line, offering job opportunities, largely cut the cost of freight, and attract more investor in this industry, which will positively activate and accelerate the development of power industry in African continent in a very long time. 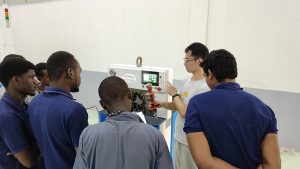